When most people think of wasps, they tend to cringe. After all, wasps can be quite aggressive, and their stings can be painful. However, wasps are fascinating creatures that play an essential role in the ecosystem.

In this blog post, we will answer common questions about wasps: what do they look like, why are they aggressive, where do wasps live, and what do they eat? We will also discuss wasp control methods and why homeowners might want to consider controlling the wasp population around their homes.

Wasps Are Misunderstood, But Still Not Friendly

If you’ve ever been stung by wasps, you know just how painful and annoying those little creatures can be. But wasps are more than just a nuisance; they can also be aggressive and territorial. But, while they’re easy to provoke at times, wasps aren’t looking for a fight. In other words, wasps are prickly and aggressive. Some may look similar to bees but are very different from their flying counterparts.

Most wasps are beneficial to have around because they help control other pests. For example, yellowjackets eat caterpillars, grubs, and other garden pests. Paper wasps feed on nectar but will also hunt for caterpillars and other soft-bodied insects to feed their young. While wasps eat other insects, they are also attracted to sugary foods, which is often why they interact with humans. Fortunately, wasps are predators and parasitize many pests, including caterpillars, flies, and aphids.

Wasps Are Not Pollinators

While they may pollinate flowers indirectly, wasps are not considered pollinators since they do not deliberately transfer pollen from one flower to another. However, wasps can be important in pollination because they visit flowers for nectar and then transfer pollen on their bodies as they move from flower to flower. While wasps aren’t pollinators and don’t create honey, some species produce honey, or “royal jelly,” to feed their larvae, but with much less volume than bees.

Wasps build their nests out of wood pulp or plant fibers. The wasp chews on the wood to make it into a pulp, which is then used to create the nest. Some wasps will also use saliva to help bind the wood pulp together. Wasps typically build their nests in trees, bushes, or under the eaves of a building, which is where the trouble starts. Like wasps, humans defend their homes from threats, and it can be quite easy to set them off. So if you have wasps nesting on your property, it’s necessary to take action to remove the nest and wasps before they become a problem.

Wasps can sting humans if they feel threatened. A wasp sting is quite different from a bee sting. A wasp sting contains venom, used to kill prey but can sting multiple times if necessary. On the other hand, bee sings, like the honey bee, are not as dangerous to humans because they can only sting once. A bee’s stinger is barbed, so it gets stuck in the skin and tears the bee’s abdomen open when it tries to fly away. This is extremely painful for the bee and often fatal. 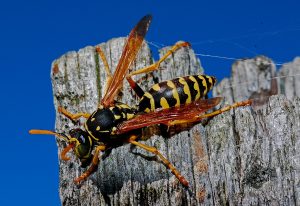 While wasps and bees may look similar, the two insects have fundamental differences. For example, wasps tend to be more slender than bees, with less hair on their body. Wasps also have a narrow waist that separates the thorax and abdomen. Here are some other key differences:

Between bees and wasps, wasps are naturally more aggressive than their relatives. So, what causes wasps to become aggressive? There are a few reasons:

While wasps can be beneficial, they can also become a nuisance. If you have wasps nesting on your property, it’s crucial to take measures to control them. There are a few things you can do to get rid of wasps:

Wasps can be beneficial insects, but they can also become a nuisance. If you have wasps nesting on your property, take measures to control them, especially if you have children.

If you have wasps nesting on your property, Gecko Pest Control can help. We provide wasp nest removal services that are safe and effective. Our team is experienced in wasp control and will work quickly to remove the nest and wasps from your property.

Our wasp control services are top-of-the-line, and our friendly and reliable team. Contact us today to schedule a consultation. We’ll help you get rid of your wasp problem quickly and efficiently and help keep your family safe.